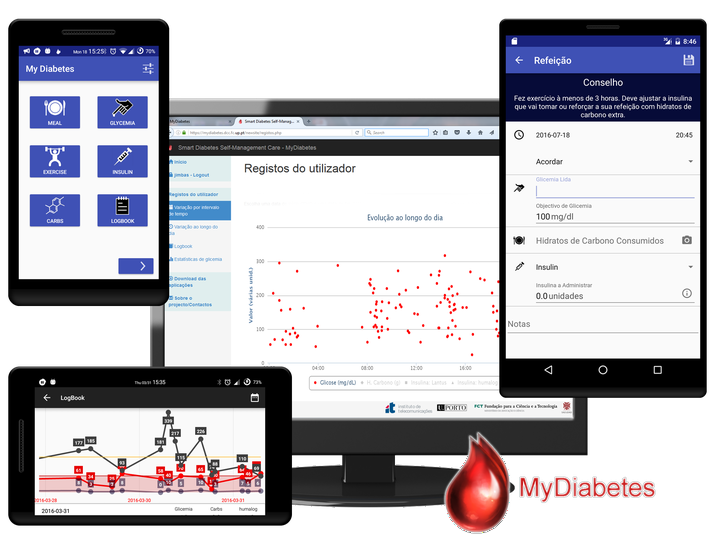 Diabetes is a rising disease in terms of number of people affected and the costs associated with its treatment. 439 million adults and USD490 billion are estimated by 2030. Portugal had, in 2011, 12.7% of the population between 20 and 79 with the disease.

This project aims to develop a smartphone application to help the diabetic patient deal with managing the disease. A first step is to enable data recordings of the daily diabetic life in an intuitive and simple way, so not to be a burden, which can undermine the gathering of the information. This information taking should be seen more as a process (e.g.: having a meal implies registering carbohydrates, glycaemia, insulin) than a direct and separate register of several records.

A second step is to incorporate the knowledge/protocols of doctors and nurses into the application. These protocols allow to react to certain patterns of behaviour, detected by the records taken. As an example, it could warn the user that it made exercise 2h ago and that perhaps her insulin dose should be adjusted, or that the current illness situation (that has been going on for 2 days) would merit an insulin correction.

A third phase would be the pattern analysis of the data gathered, to search for patterns in two ways. One would be to provide feedback for the patient regarding some behaviour/actions that may be inducing erratic or bad disease control, e.g. detection of recurring low values before bedtime occurring when high values of carbohydrates where consumed at dinner time. The other perspective, would be for a more global analysis using the aggregated data from several patients for medical purposes. Here insights on insulin adjustments, differences between patients using same approaches, unknown correlations could be analysed from an endocrinologist point of view with more data to support it.